You are here: Home > CFFEF

Our CFFEF Indiegogo Campaign was a resounding success. A huge thank you to all who contributed.

We are thrilled to announce that the online campaign raised $20,108, over 80% of its goal. The campaign also inspired an additional $18,190 in offline donations and commitments. When the two matching donations of $25,000 each are added, the grand total we were able to raise for Finnish Studies is $88,298.

Some statistical information: The online campaign attracted over 4000 visits, 106 contributions from 10 different countries, and 212 referrals. Quite a wide reach!

The result is indeed excellent news for the Finnish Studies Program – its immediate need for 2015-2017 has been met and the future has become much brighter. We are also pleased that such a large number of individuals worldwide have gained awareness of and exposure to the Finnish Studies program.

We wish to remind all those who did not originally include their full name and address to send them to the treasurer of the CFFEF so she can issue and send you a tax receipt.

Finally, we would like to thank all contributors for your generosity. We extend a special thank you also to all those who contributed to the campaign video and the campaign design. The technical know-how was generously donated by Frank Herr at Best Light for which our gratitude is boundless.

The Finnish Studies at the University of Toronto is the largest, most comprehensive program dedicated to the study of Finnish language and culture in North America. The program has offered high-quality courses in Finnish language, literature, culture, cinema, and immigrant experience for more than 1300 Canadian and Finnish-Canadian students.

Sadly, during the economic downturn the Finnish government was forced to drastically reduce its 25-year sponsorship of the program resulting in an urgent need for program funding.

Canadian Friends of Finland Education Foundation is hosting a crowdfunding campaign to help raise the $25,000 needed to preserve the program for the 2015-2016 year.

HOW YOU CAN HELP:

Your gift will honour the Finnish legacy in Canada, bring awareness to Finnish culture and values, and strengthen the cultural and economic relations between Finland and Canada.

We thank you for your support.

“Let’s give Finnish Studies at UofT a new future!” 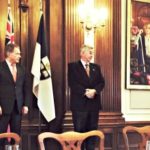 The following scholarships were given out during President Niinistö’s visit to the University of Toronto: